I've been writing since middle school but for a period of time after I left college I stopped writing consistently. Then in 2008 I had my first idea in a very long time. That idea was NOT The Low Notes. Before The Low Notes I was working on a paranormal romance. I adore the genre of paranormal and I've always liked writing and reading it.

The idea started out as a vampire story (because what was hotter in 2008 than vampires?!) but eventually morphed into a story about angels who walk the earth. The story is still collecting dust on my hard drive and every now and then I take a look and edit it a bit. One day I'll finish it. After I took a course on novel writing it became clear to me that the first novel I had in me was The Low Notes.

But I haven't yet lost my love of paranormal. Specifically, young adult paranormal. Last night I was inspired and started working on something of the YA para variety and I have to say I'm a little scared. I know there are lots of authors who cross genres but it's a scary jump. I just keep telling myself that I can't be confined by a certain genre...I have to tell the stories that strike me. And trust me readers, I've been struck.

J.K. Rowling's latest release, The Casual Vacancy, is certainly a different kind of book for her but she has already made more than a name for herself so she's in the category of I-do-what-I-want. Stephen King is in the same boat. He writes less and less horror all the time even though that's what he's known for.

I suppose I could classify what I'm doing by looking at Meg Cabot. She started writing romance (under pen name Patricia Cabot) and then made the leap into YA, middle grade and paranormal. She writes across genres successfully.

So here's hoping my readers have split personalities just like me. An eclectic taste for an eclectic author.
Posted by Kate Roth at 10:45 AM No comments:

November is National Novel Writing Month! The challenge is to write a 50,000 word novel in thirty days. Can you do it? Should you try?

A few years ago I tried NaNoWriMo but failed pretty miserably. That isn't stopping me from taking the plunge this year. I'll be working on a YA novel that I've been thinking about for a while. Fifty thousand words by December 1st or bust!

I love the idea behind the challenge. It's a fantastic way to jump start an idea and to get the creative juices flowing. There's no rule that says the finished work has to be ready to publish. It's just about accomplishing a goal.

Writers tend to have a lot of ideas about what they need to do to be able to write. I'm one of them. I make excuses as to why I'm not able to work. But it's as simple as this...just write. If we take the time to sit and write, a little every day, we can accomplish what we set out to do.

I'll be posting my progress throughout the month of November and fingers crossed I'll have 50,000 words just after Thanksgiving. If you are interested in learning more or signing up for the challenge you can visit the official NaNo website here.

Get your pens or keys ready!
Posted by Kate Roth at 9:00 AM No comments:

Release Day : From the Rubble by Britni Hill

Today is a day to celebrate my dear friend and fellow author, Britni Hill. Her second novel, a follow up to Tears in the Rubble is released! If you read book one here's your chance to read the rest of the story and if you haven't read book one then there's two awesome books waiting to be purchased! 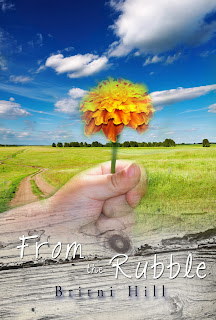 From the Rubble by Britni Hill


In the wake of a terrible betrayal, Taylor and Layla bury their feelings for the other, good and bad, just to get by day to day.  Forced together because of their daughter, Taylor struggles to forgive Layla so he falls into the role of fatherhood, naturally striving to be the best father he can be.

Layla’s guilt overwhelms her as she fights herself over her feelings for Taylor.  After all, she doesn’t believe she deserves another chance.  She’s already had too many.

Making a family out of a broken relationship won’t be easy, but with both Taylor and Layla pushing forward, will they ever find a new normal?  Will they ever confront their feelings for one another?

Hop over to Britni's blog to find all of the purchase links or go to her Amazon page for Kindle purchases. Best of luck Britni! Can't wait to see what comes next.
Posted by Kate Roth at 9:00 AM 1 comment:

Where Do I Fit In?

When I was first writing The Low Notes and even after it was first published I could never quite give an accurate title to what genre I thought I belonged in. I would say things like, "It's romance but not in the bodice-ripper-Fabio-on-the-cover way." I'd say, "It's young adult (YA) but a little more dangerous."

I felt lost in a way. It was as if I didn't have a genre to fall into. Until one day I was having a chat with someone in the business and she said the words 'new adult'.

Eureka! That's exactly what I write! NEW adult. Adults who can drive, vote, maybe even drink but they sure as hell don't have a handle on grown-up life yet.

Author/blogger JJ said this about the genre, "YA is about a certain time of life, when you are no longer a child but not quite an adult and one can write about this period of time through less literal genres like historical fiction or science-fiction and fantasy. Similarly, New Adult is about young adulthood, when you are an adult but have not established your life as one (career, family, what-have-you)."

I couldn't agree more! And I'm completely in love with the fact that I can claim this new category as my genre.

What I'm working on now would certainly be considered 'new adult' as well but I'm happy to say I also have a few other genres up my sleeve including YA romance and paranormal romance.

Stay tuned to more info on what I'm working on next!
Posted by Kate Roth at 10:00 AM No comments: